I often write blog posts in my head..at work, while driving in DC rush hour traffic, or just before I drift off to sleep. Just like that, I ponder a new topic or what my response to a Dear NwaVic letter will be. Sometimes it's triggered by conversations I have with coworkers or friends or just from inspiration from something that came into that my purview. Yet, for every 10 posts I write in my head, one makes it on here. Not because I cannot communicate it but because time keeps eluding me. I'm not naturally a procrastinator. In fact, call me obsessive but I usually can't sleep before going over my to-do list. For me, procrastination is not idleness. It just implicates my need for more than 24 hours in a day. But indeed, I must first plead that the long absence doesn't mean I was not thinking about this space and you wonderful readers who make it all worth it.

In my many a ponder, I have thought about a few private Dear NwaVic letters I've received this year and the ensuing private email discussions that I have with the writers (private Dear NwaVic letters are letters written to dearnwavic@gmail.com where the writers opt out of being published. In that case, I just privately advise). At least three of these recent letters center around breakups, hurt, wasted time and get this, revenge. One of the letters was from a previous Dear NwaVic writer who first wrote last year when her boyfriend of 5 years broke up with her and a month later married a girl 5 years her junior (what a 5/5 coincidence right?) The second letter was a young lady getting divorced only after 2 years of marriage and uprooting her life to be with him. The third was from a girl who found sexual text messages between her fiance and one of her closest childhood friends. These letters all reeked of betrayal, pain and a deep sense of loss that only those who have ever given their all to one person will understand. They asked questions about getting over the pain and what to do to move on. More so, they asked how to get those who perpetrated their hurt to feel like they felt. The latter part, I read as a subliminal request for permission to revenge and upon further correspondence, proved to be true. After all, a goal to make another hurt just because they hurt you is revenge. Because as the very definition of revenge calls for tit for tat.

Thinking about all the letters made me think about revenge after a break up or betrayal, be it by a friend or lover. Most women have felt it. The need to, even if only for a second, to put the ex friend or lover in your shoes. So s/he can feel your pain, so s/he can see your hurt and just where s/he left wounded. It is tempting to want to get back at them. Some woman slash tires. Some women sleep with the man's best friend or brother or friend's man. Some key cars. Or like in the classic Waiting to Exhale, some women empty all the man's belongings on the porch and light it on fire. Bam!

But there is a better way to get revenge. One that does not turn you into a monster like the very person that hurt you. One that does not turn you into a psychotic maniac (trust me, men can drive you that far). Instead, this better way to revenge elevates you by turning your anger into passion. A passion that ignites you to live and fulfill YOUR OWN purpose. After all, the day you were born, God sent just you. And the day you'll die, you'll answer to God alone. The person who hurt you came and left somewhere in between. And just like that, every human being is disposable (don't raise your eye brows. A post about that is coming next week). 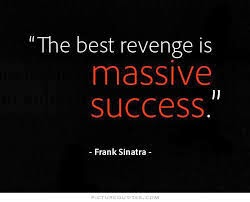 The better revenge is Success. Just one word. Success. There is none better. It allows you to get rid of the person from your life and focus on yourself to complete and compliment YOU and not anyone else. Because true and true, though you'll love and trust your mother, your father, your spouse, siblings or best friend, in life, the only person you can trust "absolutely"  to never, and I mean never ever, let you down is God. In my conversation with writer number 3, she complained, "but why does he get to get away with it? Does he think he can come into my life, walk all over it and just move on while I'm stuck pregnant with his child?" I said, "are you a child of God?" When she responded in the positive, I said, "Okay, then you should know better  than to think that a person who hurts God's own goes scott free. Their pain is just not your responsibility to cause."

Revenge may happen on your account but its just not your place to perpetrate it. 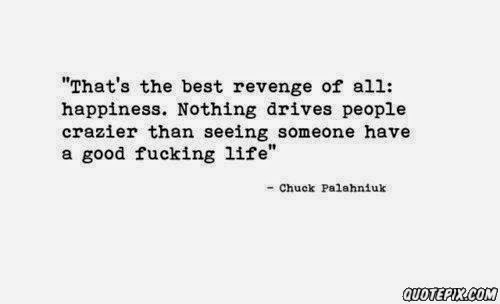 Truth be told, revenge may give you short term ratification but long term, it does not heal your pain. Instead, with time, it puts you back into grime. By revenging, you essentially become a person you are not but what someone else made you to be. You give the other person gratification in knowing they have such hold on you and your life. From my personal experience, the best revenge is focusing on God and YOU. There's a certain amount of peace that comes with trusting God to fight your battles. I understand this is easier said than done but I know it is possible because I've done it. Practically, you can do it by reminding yourself daily that you are God's own, you are bigger and better than a heart that hurts and that every pain can turn into blessing. If you need to, put encouragement stickers around your room or office or set encouraging reminders on your phone. Shift your focus from this person who hurt you and turn it to yourself. Defy the odds. It is what makes you bigger and better.

Focus on being happier- pursue your dreams and do things that make you happy and alive- for the future because it is brighter and you will be amazed at the reward....the happier, drama-free, successful person that God made you to be.

I leave you with this quote that says it all. 
Photocredit: Google images
Posted by Princess R at 9:14 AM 1 comment: