Tales of a 'Delivery Room' Aunty

"Hmm when I have a child, you all better be in the delivery room." Ogo said absent-mindedly while picking her pimple in the mirror.

"Yea right, when you're pregnant, I'll move to far away Kafanchan because you'll whine me to death" I said almost choking on my chuckle.

"I will find you all, don't worry" Ogo replied rolling her eyes.

Oby and I looked at each other and shared a "sadly, she's right" laughter.

"Ogo, stop picking!" Oby admonished. Then we changed to subject of discussion to how Ogo needed to stop picking her pimples because it was making it worse.

That was in 2004. None of us were married, so the conversation seemed premature, to say the least.
Yesterday, 8 years later, I held my sister Ogo as she made an effort to introduce my first nephew into the world.

Incase you missed it, as of two days ago, both my older sisters were pregnant. Today, only one still is.
Because we had a false labor episode last week, I knew Ogo's baby was coming soon. So when my phone rang at 10.30pm last night, I knew it was time.

Knowing it'll be a long night, off we went. My baby sisters Nazo and Dera, and I. We arrived the hospital about 20 minutes later to find Ogo squirming in pain. She was in labor but her water hadn't broke yet. The vigil started. Five hours later her water broke but the baby hadn't come low enough. More vigil. Then, two hours later, he was ready to make his entrance.

So, I begged her to push. As she pushed, I replayed some of the warnings in my head, "don't watch o, you'd be traumatized and you'd never want to have a child". As I watched, for a moment, I wondered if this is what "they" said will scar me for life. Then, I stopped wondering and refocused on telling Ogo she was doing great. She pushed again. Then I saw a glimpse of his full head of hair.

"He's coming, keep pushing, you're doing great" I said, as I fought back the tears.

Then my mom and Oby three-way called me. I had one hand holding up my cell phone on speaker so Ogo could hear. For about 3 minutes, my mommy encouraged her baby to push out a baby. Meanwhile Oby chimed in repeatedly, "Ogo, we're rooting for you boo. Push!". I could imagine Oby's own baby giving her a "you're next" stomach kick.

And so it went on for 30 more minutes.

It must have been the 15th big push. At 6.44am. He arrived. Ora Anthony Nwachukwu came out in one swift move.
It was amazingly surreal. In that moment, I didn't just see my "beautiful, emotional, sometimes whiny but incredibly sweet and caring" sister Ogo, I saw a life maker, a beautiful mother, an accomplisher, a STRONG woman.

Then the tears came. I couldn't contain myself. My sister is a mother. My mommy is a first-time grandmother. I'm an Aunty, so are my sisters. My brother is an uncle.

My daddy would be so proud.
The clan is increasing. 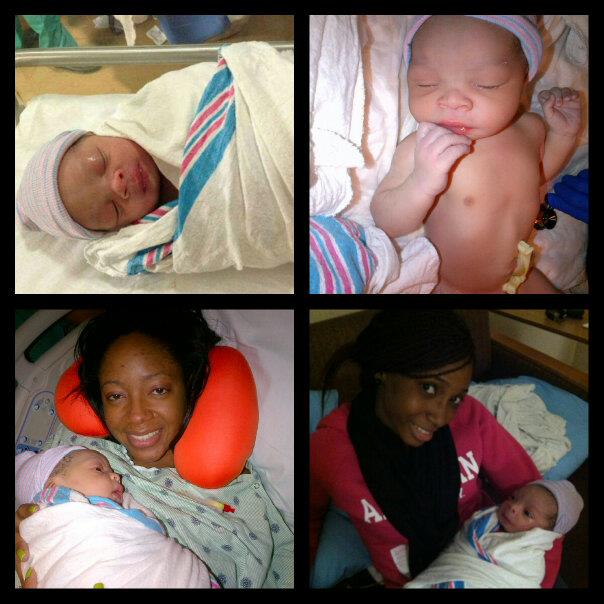 A woman's body is a powerful thing, God's lifeline; God's channel for multiplying his own; God's own nurturing incubator. I started to think, why then do we women EVER question our self-worth? Why do we ever allow any man berate or disrespect us? (Especially, after you've had his baby?)  Why do children ever disregard their mothers, after they've been through the pain of bringing them into the world?

This post is dedicated to all women out there. Even if you've never had a baby, be content with the lifeline God has created you to be. Realize you are Capable. You are Strong. You are WOMAN, the canal of God's creation.

I've never been prouder to be a woman.

Congrats to my sister Ogo and her husband Ikenna on their bundle of joy.

& Stay tuned for the arrival of my first niece soon soon ;-)


“There is a secret in our culture, And it’s not that childbirth is painful, It’s that women are strong.” ― Laurie Stavoe Harm

Reading this, my eyes couldn't stop watering...beautiful experience! Congrats to her and your family. Beautiful baby :)

i cannot be more proud of how far the good Lord has brought you all in life having watched you all mature and succeed. i have quietly followed ur blog and have never commented but this is one story that has really moved me. well done girl, Umu Vic jisienu ike oo. Our God is indeed awesome

That story made me tear up. How sweet! Congrats to Ogo! Love u guys

Nne congrats to you and your family. Thank God for safe delivery, for a living mother and chid. God is faithful! God Bless Ora, and your entire family. Chukwu Aluka.

Awww. Congrats to your sis and family. and to you for being strong.

A child is a wonderful thing.