How to Pass the Bar: Pennsylvania edition

This post is the fourth edition on my "How to Pass the Bar" series. Here's the first edition on Maryland, New Jersey and New York bar exams, Here's the second edition on Virginia and Massachusetts bar exams and Here's the third edition on Georgia and Illinois bar exams. I'd love to hear your feedback. Hope the tips prove helpful.

In order to pass the bar, I put myself on a strict schedule. I took a morning Barbri class that started at 9 am. After class, I went straight to the library. I was at the library from approximately 2 pm until 10 pm. And I did this from the beginning of the class until the end. I felt as though I would rather give up my summer and give my all than to have regrets later.

I did not do anything social that summer. A lot of people were angry with me because they thought I was "overreacting about the bar", but I didn't care. I had to WIN. I wrote inspirational stickies all throughout my bar prep book. One reoccurring sticky was something my boyfriend told me "Win, baby, win!" I wrote this on many stickies. I put it in my bar prep book, car, bedroom, bathroom, and study area.

I also made me a bar prep playlist. I put a lot of inspirational music, as well as songs that made me work harder. I listened to music while I studied. Whenever I felt as though I couldn't do it any longer, I prayed to God for favor. I remembered that God did not bring me this far to leave me. I wrote "minimum competency" on my bar prep book because that was all that was needed.

I did it all: flash cards, sticky notes, writing out outlines, Barbri's schedule, extra MBE questions, etc. i took Kaplan MBE Combo class. I called friends for motivation. I cried to friends. I called and asked other people who passed the bar for advice.

The day before I relaxed. I did not do anything related to the bar. I stressed, but I cut that out fast! I just remembered that too many people believed in me, and with Jesus on my side I could not be defeated.

I took the first half of the bar, and I left for lunch ready to cry. All of that work and I couldn't believe I still felt uncertain. My bar study partner and I went to lunch. We vowed that "we ain't going out like that!" I went back into that test and I fought. I gave my all and I fought.  I passed both the Pennsylvania and the New Jersey bar.

Now it is time for you to fight your fight. 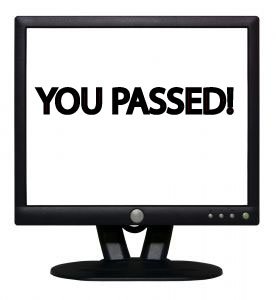