Hello,
I read this story and thought I just had to share. Apparently, 40 year old scuba diver Eli Martinez has a buddy who's a Shark. Yes, as in Shark that lives in large bodies of water. Her named Taxi and she lives in the coast of the Bahamas. Martinez calls her "a total sweetheart". Na so o. lol. 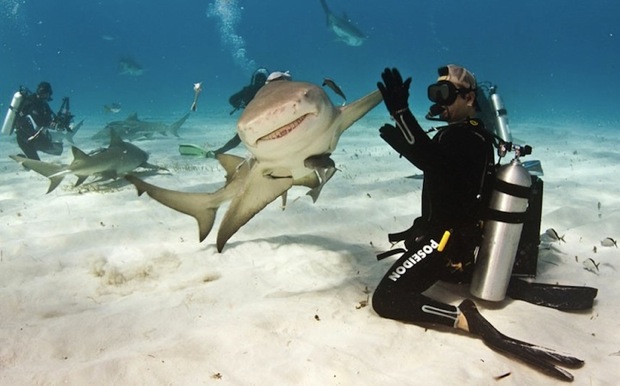 Martinez said he has worked with Taxi for a long time and he knows herto be very laid-back so he decided to hold his hand out and she came right over and slapped it. You'd think he was talking about his girlfriend/wife. lol


Luckily, his friend who owns an underwater camera was with him and captured it.


I mean, this is shocking. I would call it inspiring but me I don't want anyone to sue me for wrongful death because Nwavic inspired them to go play with sharks. Abeg, my hand no dey.

But still, I would say, kudos to Martinez. He will never forget this. It will add to his "I have lived" list. I need to find something shocking to do. I will update you once I do but I promise you it will have nothing to do with any animal :-|
Stay inspired :-)

Email ThisBlogThis!Share to TwitterShare to FacebookShare to Pinterest
Labels: Shark-HighFive