How Do You Decide Who to Marry

I read this article written by Chris Hughes today and thought it was hilarious. Marriage and picking the right partner is such "serious" business, sometimes it helps to see it in its simplest form, through the mind of kids. 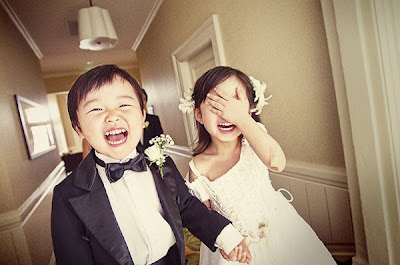 So...A group of young kids were asked how to decide who to marry and here are the results which
are pretty amusing.

It may be pretty old though but read and chuckle with me, anyway...

(1) You got to find somebody who likes the same stuff. Like, if you like sports, she should like it that you like sports, and she should keep the chips and dip coming.
- Alan, age 10
(2) No person really decides before they grow up who they’re going to marry. God decides it all way before, and you get to find out later who you’re stuck with.
- Kristen, age 10

WHAT IS THE RIGHT AGE TO GET MARRIED?

(1) Twenty-three is the best age because you know the person FOREVER by then.
- Camille, age 10
(2) No age is good to get married at. You got to be a fool to get married.
- Freddie, age 6 (very wise for his age)

HOW CAN A STRANGER TELL IF TWO PEOPLE ARE MARRIED?

(1) You might have to guess, based on whether they seem to be yelling at the same kids.
- Derrick, age 8

WHAT DO YOU THINK YOUR MOM AND DAD HAVE IN COMMON?

WHAT DO MOST PEOPLE DO ON A DATE?

(1) Dates are for having fun, and people should use them to get to know each other. Even boys have something to say if you listen long enough.
- Lynnette, age 8 (isn’t she a treasure)
(2) On the first date, they just tell each other lies and that Usually gets them interested enough to go for a second date.
- Martin, age 10

WHAT WOULD YOU DO ON A FIRST DATE THAT WAS TURNING SOUR?

(1) I’d run home and play dead. The next day I would call all the newspapers and make sure they wrote about me in all the dead columns.
-Craig, age 9

WHEN IS IT OKAY TO KISS SOMEONE?

IS IT BETTER TO BE SINGLE OR MARRIED?

(1) I don’t know which is better, but I’ll tell you one thing. I’m never going to have sex with my wife. I don’t want to be all grossed out.
- Theodore, age 8
(2) It’s better for girls to be single but not for boys. Boys need someone to clean up after them.
- Anita, age 9 (bless you child)

HOW WOULD THE WORLD BE DIFFERENT IF PEOPLE DIDN’T GET MARRIED?

HOW WOULD YOU MAKE A MARRIAGE WORK?

(1) Tell your wife that she looks pretty, even if she looks like a truck.
- Ricky, age 10
They hit some good points, didn't they?
Have a great weekend
Stay Inspired....
Posted by Princess R at 6:49 PM

I like Pam's answer to who do you kiss lol