The Art of Picking Your Battles

Last week, my hairdresser told me I was too much for her. She said I haggle prices, then I'm always looking in the mirror to make sure she's doing it right. I was shocked. I mean, little old sweet me. *bats eyelashes*

I was really tempted to be offended. I mean, that was a very unprofessional statement. I thought about flipping out on her. I think she even expected me to. Besides the fact that I was sitting in her chair with my hair at her mercy, I also considered the fact that this battle wasn't worth it. She's been doing my hair for years, she's close to where I live and I AM able to haggle her prices lower than all the other places. The relationship I have with her is important to me in the long term and for me to maintain it, I decided she needed to have this win. So I instead of the "what kind of nonsense  unprofessional statement is that?", I said, "Wow you must've been holding it in so long. I'm glad you let me know." Then I went back to watching Netflix while she anxiously waited for me to bark. The bark that never came.

It's the same logic in any relationship. My sister Oby always says "you have to pick your battles boo. Not everything is worth fighting for. Trust me, that's a key to making any relationship work". It's a lesson I'm learning. If you bark every time, your bark becomes stale and is less effective. But if instead, you let the little things slide, when you do bark, it'll carry more weight.  The person you're barking at will know that the issue is serious enough to be fought for. 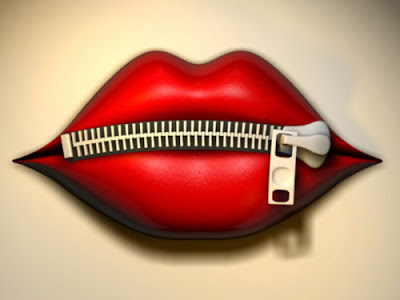 Whether it is with your friend, at work, in marriage, with a stubborn child or in your relationship with your hairdresser, sometimes, you just have to let it go. 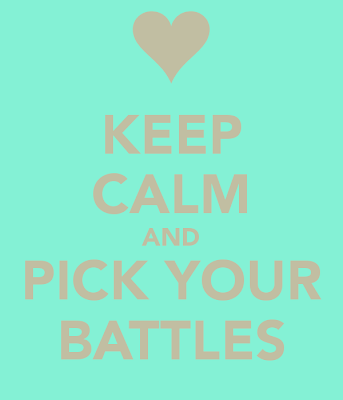 1. Be honest with yourself- Why are you really angry? Does that issue really matter? Tomorrow, in a couple weeks, months or years, will that issue make a difference? How big is the issue? Is it a small annoyance or inconvenience? If it is an issue that threatens your safety or security especially in the long term or is a recurring enough, then it is big enough to go to war. If not, let it slide.

A friend of mine told me once that every sunday night, she would fight her husband because he wanted to watch sports and it was when her show came on. When she would go into the other room to watch it, he'd get upset that he was lonely. She said she couldn't understand it and would get livid at his selfishness. She confessed that the moment she realized how flimsy this fight was healed the bickering. She simply found a website that streamed her show, then sat next to him with her headphones on watching her show. The sacrifice was worth the peace.

I even remember as a child, my father liked to go to church at 9am on the dot. Left to him, he'd be at the church 15 minutes before. To him, being on time was being late and being early was being on time. My mother, on the other hand, would take her time to get ready. Often, we won't get to church till 9.30am which was fine with her and would make him so upset. The solution? When my dad couldn't wait any longer,  he'd go ahead to church and take those of us who were ready and my mom would join him later. No fighting, no anger, no hard feelings.

Sometimes, you just have to indulge the other person. If it is important to your wife that you wear a tie to church, do it. Is not wearing the tie worth smearing your Sunday?

2. Consider the flip side- Even when you think you're right and the other person is wrong, taking a second to consider that the other side may have a valid point is enough to dispel a fight. When my hair dresser called me "too much", I took a second to consider that probably my constant looking in the mirror was putting pressure on her or distracting her while she was working. 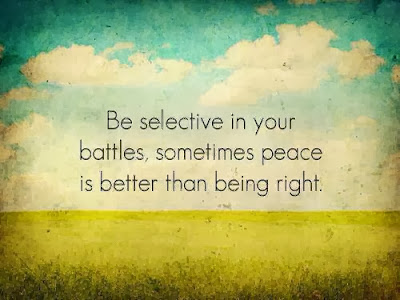 3. Think Before you Speak/Act- It seems simple but it is the hardest thing to do! Whether or not you are considering the other side's points, it is important to step back and consider "is this worth a fight?" "Is what I'm about to say worth the reaction it will get?" In the heat of the moment, we say things we don't mean and when the smoke clears, it is hard to take it back. What thinking does is make picking your battles less about fighting and more about choosing what is worth getting angry over. It dispels the "I won't fight, but I will be angry silently".  Instead, it is "I won't be angry at all". Because picking your battles is worthless if you are angry. You will erupt later over something insignificant.  In simple words, connect your mouth with your brain, innovate a filter for your mouth and then, use it.

I read somewhere recently that everytime a situation happens, it is your choice as to whether you will let it steal your joy away. In essence, you can't control every situation in your life but you can control how you react to it. That is what you can control.

If you don't remember anything else, keep this in mind.... 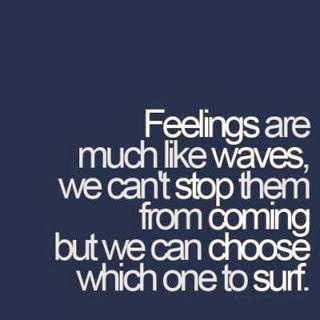 I love to read your write ups Ral! And yes Oby is so right here!!!