11 Tell-Tale Signs He's Really Into You

My morning commute to work is quite tedious and so in an attempt to entertain myself, I spend the hour listening to radio shows. This morning, a young lady called into the radio show and wanted the hosts to call a guy she had been "dating" to discern whether he liked her and wanted a long term relationship with her. When they asked her about the nature of their relationship, she said they met at work and had been sleeping together but had never been on an official date. She said he called him often but he took days to return her calls or texts but would show up at her apartment on the weekend nights.

I couldn't help but laugh because this girl didn't need radio show hosts to tell her this guy was just not into her. Everything he was doing showed that all he was interested in was sex. But just like many other women, she was buried in stinking denial but obviously had a cold because she don't notice the stench till she had given too much of herself.

This is a constant topic of discussion among my friends and I. It usually starts with "Ral, there's this guy". Then there's the " I think he likes me". Then knowing where the conversation is headed, I say, "But?" The conversation from then on becomes an analysis of the web of what he says or does not say and what he does or does not do.

Even from my personal experiences, I have learned that men are not rocket science. Even though they are not the best emotional/verbal communicators, they communicate through their actions. As a matter of fact, their actions speak louder than they could ever put into words. True story.

While I must say that every situation is unique, in that there'll always be an exception and some men are harder to read than others, for a majority of the male population, if a man likes you, you WILL know. You won't need to play the guessing game. This is because when a man is into you, you occupy his thoughts and even though he may not be able to articulate it or choose not to, most of the time, it sips through his actions. So ladies pay attention..this one is for you. Here are a few solid signs that he's definitely into you. Standing alone, each sign may not mean much but if he gives you more than a few of these, he definitely likes you.

1. He wants to be in touch with you: This is the most basic sign. If he likes you, he WILL call and text you, even it means going out of his way to do so. No matter how busy a person is, if they want to talk to you, they will make the time to do so. It's as simple as that. If he says he will call you back and does so a couple days later, short of him being in the hospital or lost at sea, he's just not that into you. And pay attention to the stupid excuses he'll give if you ever confront him. If the reason doesn't make sense, it's probably bull.

2.  He wants to see you and be around you: He enjoys your company and will make an effort to spend time with you. For e.g., he's always inviting you to events or asking around if you'll be at a certain party or gathering. Also, for e.g. if you live in a different state or country and he has the financial means, he WILL visit you. Trust me, a man who's into you will leave straight from work on a Friday night to the airport to fly 5 hours across the country just to be with you for 2 days...even if he misses his flight, he will wait 5 hours at the airport just to get on the next one...and he will fly back Monday morning and go straight from the airport to work. And when I say trust me, I mean trust me ;-)

3. He is not ashamed of you: If he likes you, he will tell whoever cares to listen. He will tell his friends and family about you. he brings you around his friends. And before you know it, he's be wanting to bring you home to mama. If a man doesn't take you out during the day, he's worried about who's watching and you should be worried.

4. He laughs at your jokes: When a man likes you, he'll laugh at your jokes even when it means laughing at you for even "attempting" to be funny.

5. He wants details: He is interested in you and your life. Beyond "how are you", he actually wants to know how your day went, who your friends are, what you ate for lunch and everything in between. He cares about the details of your life....the little things that make you YOU.

6. He compliments you: When he's into you for the long-term, he'll compliment not only your physical appearance but your personality- the things that draw him to you. For e.g. your kindness, your free spirit,your sense of humor, your calm demeanor, your honesty, etc. 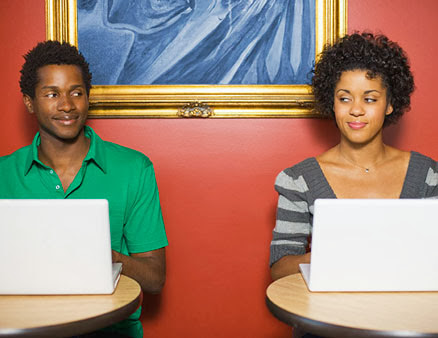 7. He find reasons to be by your side:  When you're around each other, even in a group of people, he's not only stealing glances at you, he's subtly finding reasons to make physical contact with you. For e.g. long hugs or a gentle pat on your back. Not in a creepy way...but in a friendly manner. This goes to the law of attraction...if he's into you, he just can't stay away.

8. He listens to you and remembers things you tell him: A man who's into you never forgets the things that are important to you. If you ever mentioned to him that you liked a certain movie or artist, it'll stick and if he's romantic enough, he'd randomly get you tickets to see the movie or artist in concert.

9. He makes you a part of his life: If he likes you,  he wants you to be part of his daily life and not just a hobby or pass time. If he's calling you only when he's bored, you're just a side piece.

10. He makes an effort to impress you: Because he likes you, he wants you to be happy and will do things to put himself at an advantage with you. This doesn't have to only mean taking you to expensive restaurants or shopping, even though I'm sure this works too (;-), sometimes its as simple as sending you flowers or randomly sending you a song that reminds him of you.

11. He wants you to get to know him: When a guy starts "catching" feelings, he inadvertently becomes an open book. He'd tell you things he never knew he could share with anyone. This is because he is comfortable around you and wants you to get to know him. I always tell ladies to milk this in the beginning because you know men and their feelings; the more comfortable they become with you, the more they can get away with. hehe

There you have it. The key word here is Consistency. If he's really into you,  there won't be any disappearing acts or emotional gambles. I know some of these signs seem pretty common sense but I think sometimes we all need a refresher because as women, sometimes we forget the simple things and end up selling ourselves short.

And oh yea, this post is dedicated to my really good friend who's currently wondering, "Is he really into me?" *hugs honey!*