Ode to a Legend: 21 Inspiring Facts about Nelson Mandela

Yesterday, Nelson "Madiba" Mandela, a man known for his conviction, courage and "lack of bitterness" died at 8:50 p.m. (1:50 p.m. ET) in his home in Houghton, Johannesburg surrounded by family. Yesterday, the world lost a legend.

It can be easily said that Mandela was one of the greatest men that ever lived. He was not only an inspirational figure, he was a man of extraordinary patience, wisdom and zeal. It takes a special kind of person to spend 27 years in prison, and upon release not only forgive those who caused his pain, but use it to make the world better.

“Difficulties break some men but make others. No axe is sharp enough to cut the soul of a sinner who keeps on trying, one armed with the hope that he will rise even in the end.” —From a letter to Winnie Mandela, 1975

“The greatest glory in living lies not in never falling, but in rising every time we fall.”

In the wake of his passing, world leaders have made statements testifying about to the great man who became South Africa's Black President. The U.N. Security Council called Mandela "a giant for justice and a down-to-earth inspiration", Irish leader Enda Kenny said Mandela's name "became synonymous with the pursuit of dignity and freedom across the globe" and British Prime Minister tweeted, "a great light has gone out in the world....Nelson Mandela was a hero of our time." Ex-Presidents George H. W. Bush and Bill Clinton also reacted calling Mandela "a man of tremendous moral courage" and "a man of uncommon grace and compassion, for whom abandoning bitterness and embracing adversaries was not just a political strategy but a way of life", respectively.

President Obama chimed in, "We've lost one of the most influential, courageous and profoundly good human beings that any of us will share time with on this earth...He no longer belongs to us. He belongs to the ages."

In celebration of the life of an honorable man, here are 21 inspiring facts you may not know about Mandela;

2. After his baptism, a teacher gave him the name Nelson.

3. He grew up in the small village of Qunu which had no roads or footpaths and people lived in huts.

4. His father, Gadla Henry Mphakanyiswa, was a counselor to the royal house of the Thembu tribe.

5. His father died when he was nine and he was adopted by the Thembu regent, Chief Jongintaba Dalindyebo.

6. He was the first member of his family to attend school.

7. He, alongside Oliver Tambo started South Africa's first black-run law firm where they assisted blacks who had disobeyed Apartheid-era laws.

8. He was known as an expert in disguising himself as a chauffeur, chef or fieldwork to avoid arrest.

9. The day he was arrested in 1962,  he was wearing a chauffeur outfit.
10. Once, he fled from Johannesburg to escape an arranged marriage.

11. He was a big sports fan, especially boxing and soccer, even in prison.

12. As covered in the 2009 movie Invictus, he used sports to bridge racial gaps in South Africa.

13. Invictus was named after a poem by William Ernest Henley that inspired Mandela during his 27 years in prison.

14. Mandela was sentenced to life in prison, and not death, because he gave a courtroom speech about his willingness to be executed that caught international media attention.

15. In prison, he and the other prisoners used secret notes to each other as a method to organize a hunger strike in an effort to make their living conditions better.

16. In 1985, South African President P.W. Botha offered Mandela a chance to get out of prison on the condition that he renounced armed struggle. But he declined based on principle. He believed that as a prisoner, he was in an unfair position to enter into a contract; "only free men can negotiate".

17. In 1992, he recited one of Malcolm X's speeches in the Spike Lee Film "Malcolm X" but refused to say the words "by any means necessary".

“I learned that courage was not the absence of fear, but the triumph over it. The brave man is not he who does not feel afraid, but he who conquers that fear.”

19. Over his lifetime, he won over 250 awards, including honorary degrees from over 50 universities worldwide. He was also the first living person to be an honorary Canadian citizen and the last person to receive the Lenin Peace Prize from the Soviet Union.

21. In 2009, the United Nations pronounced July 18 (Mandela's birthday) as Nelson Mandela International Day to honor Mandela's legacy and promote community service.
Mandela lived long. Even though, he was not a perfect man, having been married 3 times (2 of which ended in divorce), he lived a meaningful life. He was only a human who emerged as a hero of our lifetime. He fathered six children and 17 grandchildren and a good number of great-grandchildren but he has been called a "father of South Africa".


“I have walked that long road to freedom. I have tried not to falter; I have made missteps along the way. But I have discovered the secret that after climbing a great hill, one only finds that there are many more hills to climb. I have taken a moment”

Madiba lived 95 years on earth but his legacy lived on. Like African Activist and U2 singer Bono, put it, "It was as if he was born to teach the age a lesson in humility, in humor and above all else in patience".

In his own words:


"Death is something inevitable. When a man has done what he considers to be his duty to his people and his country, he can rest in peace. I believe I have made that effort and that is, therefore, why I will sleep for the eternity."

Rest in Peace Madiba. Thank you for living a life that will always inspire us all. 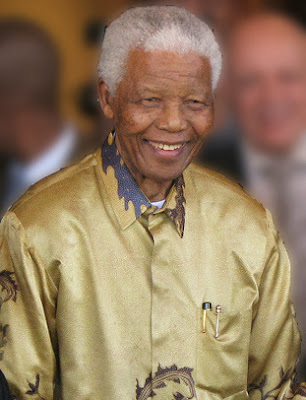 Sources: USA Today and NY Mag.
Posted by Princess R at 2:25 AM