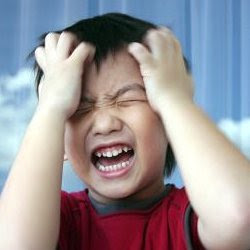 Tantrum: an uncontrolled outburst of anger and frustration, typically in a young child.


My younger brother KK used to throw the loudest tantrums as a child. He'd scream and shout- throw chairs and scratch the walls when he didn't get his way. Last born syndrome maybe?

I remember once we pulled up to a Chinese buffet after church and all jokingly got out the car, and absent-mindedly told KK we were about to go in and eat and come back, then we proceeded to walk away from the car. KK was only 4 years old but I'm surprised his scream did not immediately send an "abused child" signal to Child Protective Services. Our continuous laughter and attempts to explain that we were joking, did not help matters. He continued to kick and scream until he smelled the General Tso chicken.

We all throw tantrums. True, tantrums are most commonly seen in young children. But we, as adults throw tantrums too. We throw them when we choose to dwell on unanswered prayers, instead of the bounty of life we have. We throw a tantrum when we blindly chase what we think we "want" without first seeking God's face. Then we get upset when it doesn't turn out the way we planned. We throw tantrums when we "think" our prayers have gone unanswered...that God is ignoring our "needs".

Anger and frustration at God is equivalent to throwing tantrums.


I sometimes throw tantrums. Because there were things that I wanted. And I wanted it NOW. Because in my head, NOW is perfect timing. If I could just get it, then I'll be happy. Then I'll be content. Then I'll know Jesus loves me.

“Do not be afraid or discouraged, for the Lord will personally go ahead of you. He will be with you; he will neither fail you nor abandon you.” Deuteronomy 31:8

But I'm already happy. Because God has blessed me beyond my imagination. Because I know He sees the things I need....not the things I want. Because my life is not mine...it's His glory that comes first. And so, the only things that qualify as a "need" are things that will bring Him glory. There's a peace that comes with giving up control...giving up the tantrum.

"Indeed, the very hairs of your head are all numbered. Do not fear; you are more valuable than many sparrows. Luke 12: 7

KK is almost 21 years old. If there's anything I learned from watching him throw tantrums growing up, it is that tantrums never got him what he wanted. It was when he was sweet and kissed my mom good night, that she'd say "Okay you can stay up an extra 30 minutes." It was when he cleaned his room, that my mom will say, "You can go the party. Just be home on time." It was when he showed a little bit of discipline that my dad said, "Keep the change from your school shopping."

In the same way, God does not hear us through our tantrums. The anger and frustration only exposes our human need to be in control of our destinies. 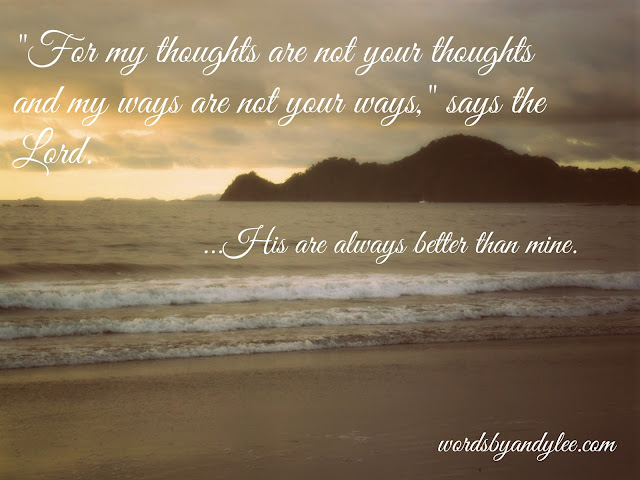 So, this year 2016...all my hopes, all my dreams, all my plans, I'm leaving them at His feet. It's not been easy. It's only January 19th and I've already been tempted a few times to throw one. But I'm making a conscious decision to "sugar" God up with praise till and even after he says, "You can have that and more, child".