Uncommunicated Expectations: What do you Expect? Who did you tell?


What do you expect?

Who did you tell? 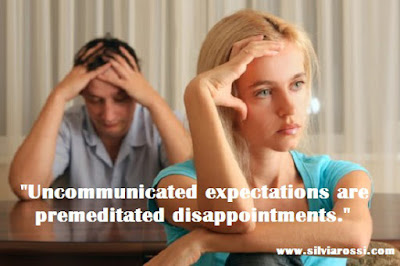 Like we all know, communication is the engine in every relation"ship"- friend"ship", marriage, dating or family"ship". But what exactly are you supposed to communicate? The short answer "everything!" Your feelings, your plans but most of all, your expectations.

I told you in a previous post about the friend "K" who "expected" that when I visit her city, I would spend every day at her house. Lo and behold, in my mind, I genuinely believed that two visits during a 4-day trip to a city where I wanted to see about 10 people was enough. It wasn't until she blew up at me about how much i didn't care about our friendship, did i see the magnitude of discord between her expectations and my actions.

We all have standards that have been formed by upbringing, beliefs, fear, past experiences, inner convictions and the various pieces of information we have heard and believed as true along life's way. These standards form the expectations and unconsciously place on the people we "relate" with.

Some people live by the motto "Expect nothing. Never be disappointed". It IS the practical thing to do if you want to be foul-proof to any disappointments. But then, being foul-poof to disappointment is also being foul-proof to "real" strong relationships, because at some level, strong relationships need a bit of vulnerability. Even though I enjoy my own company, I do like the human connection that comes with forming and sustaining relationships... However, growing up has created a haze such that we are all trying to "live" and responsibilities to sort. We are all side-tracked by pursuing careers, lifelong commitments and family. Gone are the days when friendships and relationships were built around convenience. Gone are the days when our closest friends either sat beside us in class every day, lived across the street or went to the same church as you every Sunday. Gone are the days when all we had was time. Time to sit on the phone and talk about nothing. Time to visit each other in the middle of the day, try on each other's clothes and again, talk about nothing. Life tears us all in different directions giving us different burdens to bear and shifting our priorities.

In the midst of an ever-changing circle of life, it has become glaringly clear that friendships built on strength in shared expectations and consistency of rhythm, have longer lasting effects. We all know that friendship requires loyalty, shared interests and honesty. But more, what's often ignored is shared expectations. Telling your friend what you expect from them takes your expectation from a "should" to transparency. That way, if they disappoint you, you won't fault them for what you "assumed" they should know to do, but they said they would do.

Right before I got married, I asked my married friend Vanessa, "what is the most valuable lesson marriage has taught you?" I was expecting a book in response but her response was simple, "My husband is not me and I am not him." A statement seemingly so simple spoke volumes. We are all wired differently. Just because you would do something a certain way, does not mean your friend, significant other or sibling would. This also speaks to the importance of the "Groundrules/5 year plan" conversation before marriage. But that's a post for another day. This doesn't mean that you are not entitled to receive what you dish out. You are, but you need to communicate it. Until you share your expectations in a way that the other person understands, they will just remain YOUR thoughts.

You may think or say TO SOMEBODY ELSE, "I shouldn't have to tell them. They should know better." But if I may ask you, "How should they know? And if so, based on what?" Then you may say, because that's what I would do. And then we are back to my point, "They are not you." Take for instance, the woman who discovers 1 year into marriage that her husband doesn't want children. She probably "expected" that it's "normal" after marriage to want a family or the husband who finds out that his new wife doesn't intend to contribute a dime to the household. He probably "expected" that in 2016, a woman would want to contribute.

Everything you do for another person should be based on the goodness of your heart and not because you expect the same from them. If it is, then you must communicate that. But if you don't communicate your expectations, you are judging another person by what you think they should be doing and setting yourself up for frustration, anger and disappointment.

For example, K never told me before I visited that she expected me to visit her everyday. Or while I was visiting, if she had told me she felt abandoned, I would have explained to her the briefness of my trip and maybe if she wanted, she would've come with me while I visited other friends. Instead, she let her expectations turn into resentment and disappointment in me to the extent that our friendship would never be what it used to be.

Life is not a fairy tale. In the perfect world, friends would be able to read each other's minds and spouses would finish each other's sentences. We would be able to assume and expect our friends or significant others would do what we would do. And be right. But in the "GO-world" we live in, if you want to maintain a relationship or friendship amidst the chaos of adult life, we can't assume that because we think, feel, and act a certain way, that another person will do what we expect.

There's no manual on communicating expectations. Of course, there are expectations that are based on common sense (which some people don't have (hehe) and religious values which you can reasonably believe a person has if you share a religion. But there are other "seemingly" little expectations that if not communicated, could blow up in the worst way possible.

Again, what do you expect? Know it.

Who did you tell? The only person who deserves to know is the person upon whom the expectation is placed.