Think what you're going through is too much to bear? 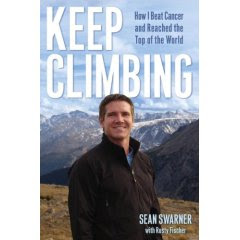 Sean is a 36-year-old cancer survivor. At the mere age of 16, after his second diagnosis of cancer, Sean's doctor told him he only had two weeks to live.

What would you do if you were told you only had two weeks to live? Me? First instinct would be to travel somewhere remote with my closest friends and family. I'd probably eat a lot of ice cream and sweet potato fries #FoodILoveMost. I'd be preparing to go. Most of all, I'd be praying a lot to make sure my soul is right with God.

It really doesn't matter what I'd be doing. What matter is what I'd be thinking.
Would I throw in the towel?
Would you?

Sean took the other route. He refused to give up.
He fought back by submitting himself to the "climb out of it" cause. Literally. After years of chemotherapy, a lung removal surgery and a medically-induced coma, he became the first cancer survivor to climb Mount Everest. He has also climbed the highest mountains on every continent.

Twenty years later Sean is not only living. He's doing what he loves.

The lesson here is simple? Think your life is over just because you've fallen on hard times? Think again. Try thinking what you'd be doing if you had two weeks to live and rejoice in knowing you are healthy AND living.

Let Sean inspire you. Know no challenge is too much for you to handle.

Keep on keeping on.