What I Learned Today...

How was everyone's weekend? I had a really good one. I was not only able to get a lot of work done, I also had time to paint my nails while I watched one of my fav tv shows...Game of Thrones :-)

Also, church was really awesome today. I learned something new today. Did you know Solomon, the wisest king that ever lived was born from what many would call a "forbidden/cursed" marriage?

Here's the summary of the story....

So, David was king of Israel. We all know he was a man after God's own heart. Deeply loved by God but as you'll see, no human is ever too righteous to falter from the righteous path. During the war, David sent out his army lead by Joab to fight for Isreal, while he stayed back.

One day, from the rooftop he saw a very beautiful woman taking a bath. He sent someone to inquire about her. The person told him her name was Bathsheba, wife of Uriah, an Israelite soldier at war. That didn't deter David. He invited her over and slept with her.

She became pregnant. When she told David, he became worried. He knew that if she had this baby while her husband was at war, it will be obvious that she cheated. So, David sent for Uriah to come back from war. When Uriah got to the palace, David told him to go home to his wife and relax for a couple of days before going back. But Uriah, being the steadfast soldier he was, declined. In his own words, "The ark and Israel and Judah are staying in tents, and my master and my Lord's men are camped in the open fields. How could I go to my house to eat and drink and lie with my wife?" His heart was with his friends at war. So he stayed at the palace and slept with the king's servants. The second day, David tried to get him drunk so he'd go home and sleep with his wife. That way, the baby could easily be pinned as Uriah's. Still, Uriah refused.

So David had to send Uriah back to war without having accomplished his Plan A. He resorted to his much deadlier Plan B. He sent Uriah back with a letter to the head of the army Joab, which read "Put Uriah at the front line where the fighting was fiercest. Then withdraw from him so he will be struck down and die". Basically, Uriah delivered his death warrant to Joab without knowing. Ofcourse, Joab followed instructions and Uriah was killed in battle.

Then David married Bathsheba and she bore his son. This son later became sick. And as the Bible says David's actions really displeased God. David was ashamed so he begged for forgiveness. His plea for mercy is Psalm 51; a Psalm we all pray when we're in trouble. 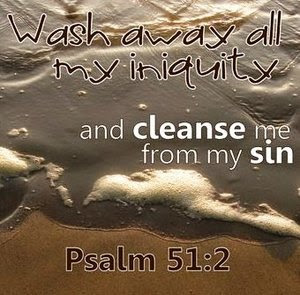 David's sick son later died. Later, David and Bathsheba had another son: Solomon, who later became the wisest king that ever lived.

Lessons Learned
1.   As human beings we are easily made slaves to temptation. If we fall into one, we may need to fall into many more to cover up that first one. Beware of the ripple effect.  I bet you David didn't foresee the depth of the repercussions of his lust. he surely couldn't have foreseen that it will lead him to kill an innocent and loyal man.
2.   No one is perfect. If David, a man after God's own heart could do something as atrocious as this, then you and I may not know just what we are capable of. Avoid self-righteousness. Instead, seek God's guidance in being the best you can be every day.
3. No matter how horrible what you have done is, if you are repentant and continuously seek forgiveness and redemption. The Grace of God sees beyond fault, yours and mine.