Howdy everyone! How was your memorial day? Mine was splendid. Attended my cousin's baby's christening on Sunday and spent the day carrying, feeding, and playing with the celebrant. She's such a peaceful baby.

She kept falling asleep in the middle of sucking on her feeding bottle. When I'll try to pull out the bottle, she'd wake up and keep sucking. then fall asleep again. We did this over and over again, till I gave up, and let her sleep for a bit, before quietly, and I mean "jejely" stealing the bottle from her grip. Mission accomplished. Sooo cuyute!

Anyhoo, yesterday, my cousin (another one- I have quite a lot :-)) threw a BBQ so it was family, friends, good food and good conversations. Can't ask for better.

So, enough about me and my weekend.

I was reading Carolyn Hax's column on The Washington Post this morning and it was another post worth sharing.

I know one too many people who have deactivated their Facebook account because they can't stand the constant showcase of people's lives and the accompanying feeling of competitiveness. A person posts constant pictures of their wedding, their "loving" boyfriends, their too cute babies, their constant "outings" and in essence, their "perfect" lives.

Here's the truth- NO ONE (and I repeat) NO ONE! HAS A PERFECT LIFE. Do not be fooled!

Over the years, I have learned that Facebook really is just a fraction of each person's reality.  It is undeniable that many people use it to paint false lives. If you start to feel pressured by other people's lives, then you need to drill a hole in your head and put this in it - NO ONE'S LIFE IS PERFECT. People, often, only put on Facebook what they want you to see.

There's a funny article about types of Facebook bragging here. Too funny! 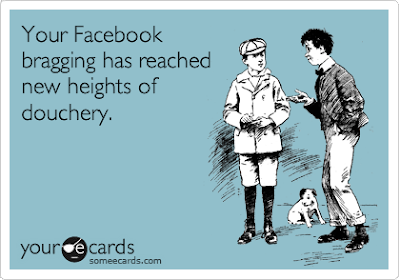 You'd be surprised by the amount of chaos there is in the world. Everyone has problems, decisions to make, pressure to meet and life to deal with. So, never mistake a person's album and statuses as the COMPLETE story of their lives.

Master the art of being content with your life, concentrating on your own path, self-empowerment and being happy, and no amount of social bragging will affect you.

Having said that, here's the Carolyn Hax article on the issue.


Why do people feel the need to use social media to constantly brag about their lives? I can’t tell you how many pictures of bouquets and dinners and chocolates popped up on my Facebook feed around Valentine’s Day — on top of the already daily descriptions of “perfect boyfriends” and pictures of vacations in real time. When did people stop living life and start just trying to prove to others that they are doing so?
And, my main question, how can I stop from getting sucked in to feeling like I need to prove myself to everyone else? I have a wonderful boyfriend with whom I share such a bond that I don’t CARE how big his bouquet is or how much my Facebook “friends” know or see . . . but I almost feel guilty. Like my indifference toward bragging means this relationship really must not be brag-worthy.
Facebook Facade
Carolyn's Answer
The first part is easier to answer than the second: Just block habitual braggarts from your news feed. Save your page for people who post things that interest you.
Some might say just to stay off social media altogether, a perfectly good and uncluttered solution — but if you see a lot of good amid the bad, then waste a little extra time on your settings to accommodate your peeves.
The second question, how not to care? If only that were about adjusting your settings.
It is possible you run with a crowd that’s particularly competitive socially, but that presents a chicken-or-egg riddle: Are they making you that way, or did you seek them out because you’re that way?
Fortunately, that question becomes easier to answer if you consciously remove yourself from the competition — not just on social media, but in other interactions as well.
It’ll take a bunch of small, on-the-spot decisions (and a few mental recitations of an “It’s not a race” mantra) to break a habit of comparing yourself with others socially. However, if you’re able to pull it off enough to step back from your guilty feelings, then you’ll be able to see whether it’s your environment or your emotional makeup that motivates you to measure your happiness against others’.
From Another Reader
Re: Bragging:
Does that go for posting a “thank you” to your spouse on Facebook for a gift? For me, it was more of giving him credit in front of our friends for what he did for me, rather than bragging about what he gave me. What about those posts on birthdays, where spouses post on their partner’s wall and go on about how much they love their spouse? Is that unacceptable bragging, too?
Anonymous
Carolyn's Answer
Is there acceptable bragging? Why does the “credit” (ew?) need to be in front of your friends?
To me this isn’t about being boastful so much as being needlessly public. Okay, send a bouquet to someone’s office so a person can enjoy the flowers, since often most waking hours are spent there vs. home. But proposing on stadium Jumbotrons I thought was a fad that needed to die, not one that needed to be shrunk down to fit individual screens.
I'm curious to hear your thoughts on this matter... letters, Carolyn's answer and all. and don't pretend you don't have any. Everyone has an opinion about Facebook :-)
Stay Inspired...
Posted by Princess R at 8:11 AM