Recently, I had an interesting conversation with a friend of mine. She was complaining about her beloved boyfriend who was wonderful in every way but in the romance department.

"Ral, how can I tell him what I appreciate most?"
"Ermm, with words"

She didn't think that was enough.

Ladies, we've all been there, where we'd wished our loved one would be more romantic. Being romantic varies from person to person. That's the very essence of it...it has to be personal...tailored to what the recipient enjoys or needs. If you pay attention to your partner, you'll find what makes them light up. Being romantic means using that as a demonstration and your appreciation of what makes them uniquely happy.

So for the sake of all ladies out there, I surveyed 32 women. The question was "Describe the most romantic gesture your man has done for you". And the responses poured in....I loved every minute for it. By the time, I was done collecting "data", I was all "awww'ed" out. Made my day, in fact.

Across 32 responses, I found the theme to be "In romance, little things matter the most". It doesn't have to be grande or expensive. It just has to be thoughtful, sincere, creative and inspired by love.

So here you go, in their own words. Ladies, forward to your men. Men, take note. :-) 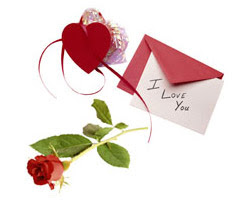 He wakes me up every morning with a kiss. It’s just what I need to start my day J

One time I had a cold, he drove to my house with flowers and a teddy bear. It didn’t work out but I’d never forget that.
-Ij

The day he sent me flowers, and then showed up an hour later all the way from another state.
-C

I got home from work after a long day. While I shuffled for my keys, he opened the door and while I was trying to take in the rose petals on the floor, he carried me upstairs, where he started with a foot rub. I don’t have to tell you how the night ended ;-)
-Mellie 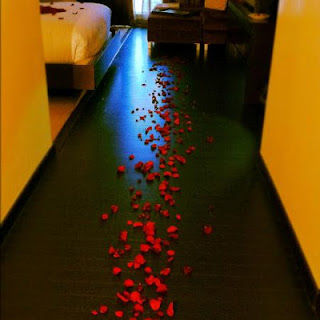 F (my man) and I were on a ‘break’. Then one Friday, I saw him at the club. I was with my friends and he was in the corner with his friends and a bunch of plastic dolls.  We didn’t even acknowledge each other. Then one drunken man walked up to me and started talking down my neck. I kept asking him to leave me alone and “running” away from him but he kept trapping me. Before I knew it, F was right beside us. He pulled the guy off me, stared him down and gently said to him “leave her alone”. The drunken man quickly scurried away while F walked right back to where he was with his friends. Needless to say, we made up soon after. There’s nothing as romantic as a man who looks out for you, regardless of whether you’re fighting or not. It means he’s mature enough to separate good emotions from bad.
- CA

I had been hinting that I liked something on the store but he kept acting like he didn’t hear me so I let it go. A week later, I found it on our bed. J
-Anonymous

He'll always wake up late at night when he was sure I was asleep or super early in the morning, and drop me a message cause he always wanted to be the first person I heard/read from in the morning. So literally, every morning whilst we were together, my first message of the day was from him and it was all kinds of messages; biblical, inspirational, etc.
-Lucy O 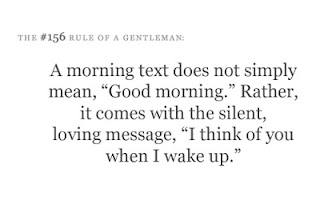 He told me we were going to dinner, and then traveling for the weekend to go rock climbing. After dinner, as we were walking out of the restaurant, I spotted a table with 15 of my closest family and friends. He had even flown in my best friend from another state just for the day! They all started reading poetry to me (apparently from him), and then he dropped down on one knee and asked me to marry him. Nothing could have been more perfect. Of course, I said, “Yes!”                  -Naa

Sometimes when we go out to social gatherings, especially when I’m wearing heels, he’d let me sit as a queen, while he brought me food. So romantic.
-Anonymous

When I’m tired, he cooks!
-Anonymous

Every morning and every night, if I can’t count on anything else, I can count on a “Good morning beautiful” text from my baby. 5 years and counting.
-G
My hubby is not the romantic type. Old school Naija.  After our "iku aka" "knocking on the door" he told me that's it ohh (naija accent). That in Naija you get your engagement ring and wedding band on your wedding day. I was sad but I said to him "story" lol. Meanwhile my bday was approaching, it was on a weekday so I thought he would do it then but nope he sent me flowers at school (awww). Lol. Then that weekend he told me to pack an overnight bag that we were going away with his friend and his wife. I thought hmmm this could be it but I wasn't fully convinced because we had company. We went to the national harbor for that weekend. Nothing happened at dinner and I knew we were leaving in the morning so I gave up. Then while we were walking around the very scenic lobby/ back to our room, he pulled me back and said "babe I have something for you" and pulled out a box. He said something nice but I was zoned out staring at the box. The couple with us finally turned around and realized what was going on and took pics. It was so nice and romantic and out of character for him. I will never forget.
-Anonymous

Every lunch break, he never fails to call or text asking if I’ve eaten. He cares, that much.
-Anonymous

Sometimes, when he’s not working my husband shows up at my job with lunch and flowers.
-Juliet 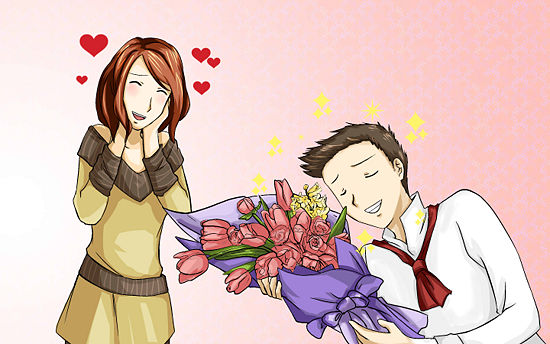 We had been on the phone when I mentioned a random pizza craving. 30 minutes later, my doorbell rang. Pizza just from him. It made my week!
-E

I had only met him 3 times when we exchanged numbers. We started talking on the phone for 3 hours per day. Then it became 4 hours. Then it became 5 hours. Our record was 8hrs on the phone. At that point, I knew I liked him but I wasn’t so sure if it was more. When he finally visited, I was so scared and anxious that our feelings were “phone feelings”. I wasn’t ready to face the feeling- I wanted to talk on the phone with him forever. However, the moment I set my eyes on him, feelings I can’t describe eroded my body. We just hugged and held each other for a long time in the middle of the airport. It was the most romantic moment ever. Today, that man is my husband of 7 months.
-Shantal

My boyfriend is a typical Nigerian man.  He is not that romantic, so most times I try to tell him what I want him to do for/to me ;-) Sometimes, he gets the message and sometimes he doesn’t. One faithful night, we talked about breakfast in bed, and I kept going on and on about stories of my girlfriends whose boyfriends brought breakfast 2 bed" (some I even exaggerated loll), just to buttress my point. The next morning, I woke up and there was nothing, there was neither a sign of *break* nor *fast*. I was upset because I had been expecting it but I brushed it off. Three days later, the day I was supposed to leave, I woke up and I saw 3 trays on d bed and a note, which read, “I got your message in your story 3 nights ago. I promise to be more romantic. The 3 trays signified the 3 mornings I made you wait for it”.
-Anonymous

I hate the rain and when it’s raining at night I literally can't sleep. So whenever it rains, even if he was sleeping or we were in a fight, he'll always ring me and stay with me on the phone till the rain subsides or till he makes me fall asleep... I found that so sweet and really appreciated it.
-Lucy O 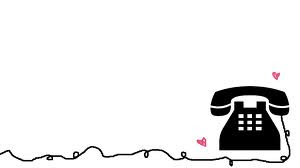 - Calling randomly on a day I'm stressed about stuff to pray for me,
-Leaving simple notes in my purse
- Simply doing stuff outside his comfort zone with me e.g. going kart racing, karaoke, and cooking!!
-Good surprises :-) e.g., sending flowers, jewelry, gifts, and ice cream as random as can be.
And I think it's easiest if he understands my love language, mine is word of affirmation and of course gifts, trust me these will definitely leave me grinning all day.
-Kiki

He took me to dinner at the Eiffel tower in Paris. So romantic!
- O.N 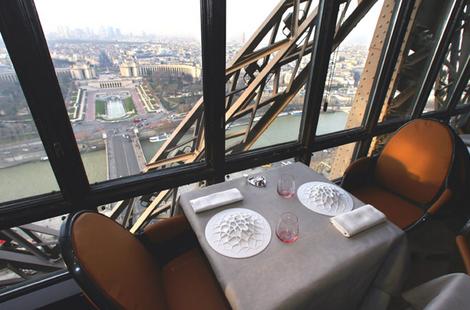 On Valentine’s Day, he surprised me with dinner. He had chilled champagne, a customized picture of us and flowers delivered to our table.
-       O.C

In the first year of our relationship, my fiancé then boyfriend surprised me with a basket of healthy study snacks to my door. Why is this thoughtful and romantic?   Well, it was my final year in undergrad and so you can already imagine that exams are going to be tough, coupled with the fact that I was on a diet (let’s just say I had to go on it haha). So safe to say that it was tough to study without your usual chips, cookies, chocolate bars, candy etc. (the typical study food). I had never gone on a diet before and he knew how hard it was for me. So imagine my surprise one day I am sitting at home studying and the doorbell rings, I go to answer it and right in front of me was a huge food basket full of grapes, crackers, cheese, apples, pears, plums you name it. It came with a note that read: “Here’s a little something to help you study”. I was so shocked and overwhelmed with joy, it wasn’t anything over the top but it was exactly what I needed at the time to help me get through the process of studying for exams and being on a diet. From that moment, I knew he was a keeper.
-       Chioma

Just that he tells me he loves me and is lucky to have me everyday.
- Anonymous

We were taking a walk once and he picked the flowers off a nearby bush. And handed it to me. Simple and cutely romantic.
-       I 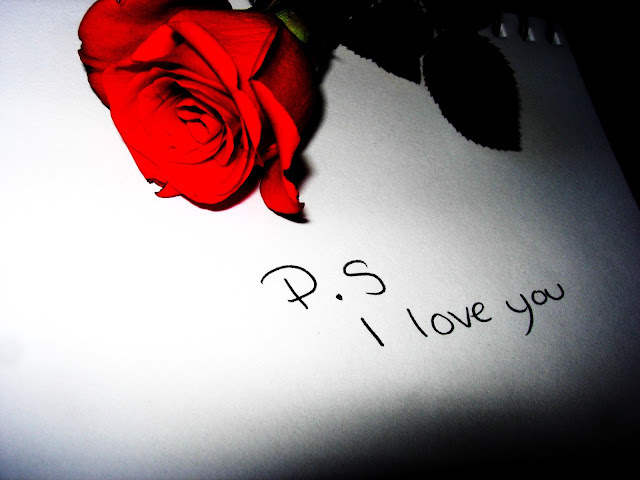 What's the most romantic gesture a man has done for you? Comment away :-)