7 Signs Your Man May Be Cheating

Recently, I received a Dear NwaVic letter from a married woman who feared her husband may be cheating and wanted to know if the things she had been noticing about him indicated that he was having an affair. Because the letter was too detailed and the situation seemed direly complicated, I didn't feel comfortable publishing it. However, I promised the writer that I would do a post on general signs that your man is being unfaithful.

These signs are not absolute. As with most things, there could be alternative explanations to these behaviors. For your sanity's sake, for every sign, I'd give you a Plausible Alternative Explanation (PAE) for said behavior. However, if you notice any of these signs, it may be time to "shine your eye" (insert Nigerian accent). In other words, these signs are indicative of the need to pay close attention to your man. Just follow your instinct. As women, don't underestimate your inner voice. Now, don't go snooping in his phone if you're not ready for what you'd find. And don't go secretively following him and then blame NwaVic. Justsaying.

1. Change in His Relationship with His Phone/Email: This is one of the surest tell-tale signs of a cheating man. If normally your man doesn't care too much about his phone and easily leaves it within your reach, and all of a sudden, does any of the following, he's probably up to something...
-puts a lock/password on it,  or
-starts to ensure its always in his pocket or hand
-sleeps with it by his bedside
-takes it everywhere with him, even into the shower
-turns it off when you're together, claiming he doesn't want to be bothered when he's with you
-leaves the room to answer calls
-jumps or acts startled when you pick up the phone, even if only to hand it to him.

Cheating has become high tech. There's even an app that makes pictures and texts to disappear after a certain time. Notice the new apps he is downloading on his phone.

PAE: If he has a new phone, he may still be so fascinated by it. He could also be planning a surprise party/engagement for you.

2. Changes in Behaviour: A cheating man, especially one with a conscience, will feel guilty. One way to offset this guilty conscience is to justify it. In order to do this, he'll try to find fault in the little things that you do. If you notice your man has started picking unnecessary fights with you or gets upset at you easily, he's stepping out. Starting fights is his way of finding a good reason to leave your house early or not talk to you for a day or two. This gives him time for his escapes. On the other hand, if he gets overly nice to you, he's trying to make you so comfortable and blind you to any signs of his extracurricular activities.

PAE: He may be going through a quarter/mid-life crisis. He may be stressed at work/school. Perhaps, he's broke. We know how men get when they're broke. If I didn't know any better, I'd say he may be on a "man-period". In that case, excuse him-it's his time of the month. LOL 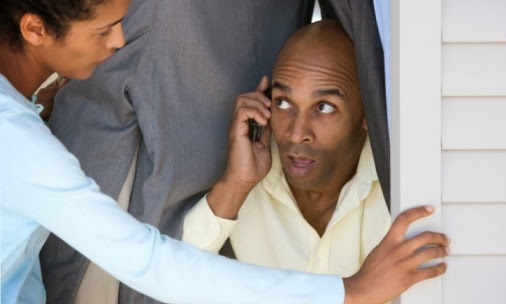 3. Rejects Your Affection: Some men are generally not affectionate and don't subscribe to the PDA generation. But if your man was once all over you both in private and in public and is all of a sudden not interested or always too tired for you, he's probably getting it somewhere else. If he's now hesitant to hold your hand in public, he is probably worried that someone else is watching.

On the other end, some cheating men experience a higher level of sexual appetite when they're cheating. If all of a sudden, he's doing things to you you never knew he was capable of, without any discussion, you have to wonder where he is learning them from. For example, if your man is a one-style predictable kind of lover, and all of a sudden he is flipping you over all kinds of ways, his new "ventures" has probably made him more confident in his abilities. You might like it, but don't enjoy it ignorantly.

4. Disappearing Acts: When you spend a good amount of time with someone, you get to know their typical schedule. You know what time they work, if at all their job requires overtime or traveling, if and what time they go to the gym, if they regularly or rarely have a boys night, and if they like to eat out, or club out a lot. Once your man starts cheating, you'll notice various changes in his schedule. There will be a lot atypical absences. Commonly, there's the "I'm working late". Then there's the " have to travel a lot for work" or way too much time at the gym, all of a sudden.

I briefly dated this guy long distance my freshman year in college who would disappear on Thursdays and won't call me till Sunday. When I'd ask where he was, he had various reasons most of which I knew were plain old crap. He was on the basketball team in his University and would often claim they had practice all day and didn't have their phones on them. For three days? Feed that to the dogs. Needless to say, that relationship didn't last long.

And then there was the guy who disappeared in an event where he was with his girlfriend.  They arrived together but then drifted apart to chat with their friends, as is normal in big events. She was dancing with her friends when she noticed she hadn't seen him in a bit. For almost an hour, she couldn't account for where he was. It took a year for her to find out that he was talking to another girl in the back staircase. Smh.

The key here is inclusion. Your man could easily take up a new hobby. For example, if he wants to spend more time at the gym or go out to more events and genuinely invites you, no need to worry. But if all these disappearing acts are solo ventures, look harder. When in doubt, offer to come on a sudden trip or outing and notice his reaction.

PAE: Maybe if he thinks you nag too much, he's escaping you. I know a guy who's wife didn't want him to go on vacation with a particular male friend because she thought the friend was promiscious. He said he was traveling for work, then went on a boy's trip with the friend and a few other guys. Such actions are still inexcusable but at least he wasn't having an affair.

5. Unexplained Random Occurrences: Men are horrible at cheating. This is a proven fact. If they are cheating, even if it takes days, weeks, months or even years, eventually they'll get sloppy. Once, one of my girlfriends was looking for her phone which fell into her boyfriend's couch. Instead, she found a piece of blond hair and she's not and never has been blond. Another of my friends went to her boyfriend's house and found that the pictures of them on the fridge were on top of the fridge. She dismissed the thought and put it back. From then on, she noticed that the first time she visited after being out of town, the pictures would've moved. Another girl I know found scratches on her boyfriend's back. As you'd imagine, all these men explained these occurrences away, but then, all these girls later found out the men were cheating.

Other random eye-brow-raising occurrences include random charge on credit card for a hotel or restaurant you never went to, random note in pocket, weird encounter with someone in public who calls you by a different name, and/or unusual familiarity with him at a place he's never taken to you to.

When in doubt, casually ask for an explanation and watch his response. Defensive, inconsistent or tense responses are dead giveaways.

PAE: Maybe his cleaning lady moved your picture to clean the fridge. Maybe he had an unusual rash/skin irritation on his back.

6. Appearance Change: If a man starts to desire more attention from other women, his physical appearance would improve, for the better. He is all of a sudden loosing a lot of weight, dressing better, taking care to comb his hair, shave and working out more. All those things you've been trying to get him to do for years, he's now doing on his own, without you. This new pride in appearance is a tell-tale sign he's vying for another woman's attention. Now there's nothing wrong with self-improvement but again, the key here is inclusion. If he's doing all these, especially when he is going out without you or your input, its an infidel's cry to be caught.

PAE: He could have a health issue that makes him concerned about his weight. But then, the key here is inclusion.

7. Sudden & Overt New Interest/Fondness: Sometimes, a cheating man hides in plain sight. If your man suddenly starts to name-drop a particular co-worker or new friend too frequently for comfort, its time to take a deeper look. One of my coworkers told me she knew her husband was cheating when she started to hear too much of "Angela said". Once, he had taken up a new interest in a Housewives of Atlanta, a show he had previously sworn off. His reason? "Angela was talking about it today. It sounds interesting". Turned out, he was watching it just so he could have things to talk about with Angela.

PAE: Maybe he just has an innocent crush on a co-worker, which sometimes is unavoidable. This one you have to nip in the bud no matter how innocent it looks because if care is not taken, it'll blossom into an affair. Make jokes about the person of interest and see his reaction. If he gets defensive of her, shine your eyes o.

If there any signs you've personally experienced, please don't hesistate to share. And as always, write me at dearnwavic@gmail.com anytime.